May the words of my mouth, and the meditations of all our hearts, be acceptable to you O God, Creator, Redeemer, and Giver of Life.

Three words. Three words that contain so much meaning and instruction that serve as a focal point for today’s Gospel reading.

In his key work “The Cost of Discipleship”, Saint and Martyr of the twentieth century, Dietrich Bonhoeffer offers one of the most insightful and powerful statements I have read on this concept of denying ourselves, which I want to share with you. Please be aware the language used is that of Bonhoeffer’s time, being late 1940s Nazi Germany:

“If any man would come after me, let him deny himself.” The disciple must say to himself the same words Peter said of Christ when he denied him: “I know not this man.” Self-denial is never just a series of isolated acts of mortification or asceticism. It is not suicide, for there is an element of self-will even in that. To deny oneself is to be aware only of Christ and no more of self, to see only him who goes before and no more the road which is too hard for us. Once more, all that self denial can say is: “He leads the way, keep close to him.”

Our gospel reading today commences in the middle of a single narrative; ‘last week’ we have Peter’s declaration of Jesus’ identity and he is renamed the ‘rock’ that the church will be built, and is given the keys of the Kingdom. And Peter’s first move with these keys, this power, this privilege and honour, and he gets it wrong! He rebukes Jesus, and tells him that what he is saying must not happen.

The teaching in Matthew is clear that suffering and death are integral to this messiahship . For Jesus to start talking about suffering and dying on a cross in Jerusalem is scandalous! Peter – newly confident with this power and position – takes it upon himself to point out how scandalous this truly is. And Jesus’ response? Get behind me Satan – with overtures of the temptation in the desert. Peter goes from ‘rock’ to ‘stumbling block’ in a matter of verses.

They need to know they are loved and forgiven. They need to hear the words You are forgiven. Not ‘God forgives you’. Not ‘we forgive you’. But YOU ARE FORGIVEN.

What is the impact of these three words have on people?

The passage starts with the words “Jesus began to show”. The Greek for this ‘show’ is translated as “expose the eyes”. It is a verb that is only used three times in the New Testament and has incredible emphasis. It is used alongside “he must go”. This is an important difference. Jesus is showing rather than telling the disciples. He is saying to them “Show this radical new truth that you must grasp”.

And this forces us to think:

What does it mean to show Christianity – to show discipleship? As opposed to ‘tell’?

I am reminded of the quote attributed to my beloved St Francis – Preach the Gospel always, and where necessary use words.

I find these verses and talk about denial and suffering difficult. And we find it echoed across the synoptic gospels. Luke spiritualises them by talking about “taking up your cross daily” as if it is a spiritual thing. Mark means it quite literally – as in you must be prepared to suffer and die. There’s a problematic history here of the way we’ve talked about denial and suffering in the church. The focus should be on getting the balance. The demands of discipleship is about balancing our own demands and personal goals with something God might be calling us to do – that the life of a disciple and following Jesus might lead us to places where we suffer as a result; the consequences of leading a “Jesus way of life”. (I do not want to deny this or talk away – something that the middle class church has done for a long time).

There have been many (many) times in the church’s history where we not denied ourselves. Where the church has not led a “Jesus way of life”. My immediate thoughts jump to the findings of the Royal Commission into Institutional Responses to Child Sexual Abuse. A dark and savage history that the church had a large role in. I’m not talking about the Crusades or the Inquisition. This occurred in most of our living memories. These were times when we were not the voice for the voiceless and did not welcome ‘the least of these’. And yet, I have some hope. With the commencement of the National Redress Scheme in 2018, the Church has a way to pick up their cross. For us to pick up our cross, and deny the church’s self. To deny, to take up our cross, and follow.

I was recently introduced to a book called “Call and Consequences”, written by African American pastor and womanist, Raquel St. Clair and I want to honour the fact that suffering and the cross of Jesus is right at the heart of black Christianity. There’s such a strong association with Jesus suffering and death in the experience of African American people. But she does name that for black woman, there has been a sort of double level of suffering that’s been heaped on them in terms of oppression, partly because of their colour, and partly because of their gender (and then economic and other factors in their too when you have systemic racism and oppression). She distinguishes quite helpfully between suffering that is the by-product of oppression – which is not Christian (we should be calling out oppression), and suffering that is the result of challenging the sources of one’s oppression. She uses the example of MLK being assassinated for challenging non-gospel oppressive behaviours.

That is a cross to carry if you’re going to do that. It is profoundly costly. In that position – we often find true life!

The Lord be with you. 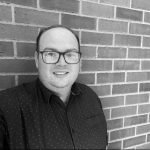 James is a TUC member and preacher with an interest in radical discipleship and Christian community. He has been preaching since he was 17 and is currently working towards accreditation as a Uniting Church Lay Preacher. He is undertaking a period of discernment.

James is works in the public service and lives with his 6 year old daughter Amelia.