“In 900 years of time and space, I’ve never met anyone who wasn’t important”

so said Dr Who the time travel expert — in  The Doctor, Season 6.

Today we are going to time travel back to the Middle Ages in England to meet someone important –  Julian of Norwich. Julian was a Christian mystic who lived in turbulent times.

It is something that has not been emphasised in the Protestant tradition until recently.  It has more emphasis in the Anglican Church, Catholic and Orthodox churches. We too can learn from this tradition as a way of enhancing our spiritual life. More Christians today value it as a part of their pathway in the Christian journey.

The tradition of the mystics goes back to the Desert Fathers and Mothers. They were Christian ascetics living in the deserts of Egypt, Israel, and Syria in the 4th and 5th centuries or even earlier. They typically lived in the monastic communities that began forming during that time, though sometimes they lived as hermits.

So back to Julian of Norwich  –  why learn about a woman of the medieval era in the 21st century?

1.  Because she is still highly regarded today due to a book she wrote and

2.  we can learn from her wisdom and add to our spiritual life.

She is known by various names Mother Julian, Dame Julian and Saint Julian. And she lived from 1342 to sometime after 1416.

The times in which she lived, were times of death and destruction. People faced the bubonic plague which arrived in Europe in 1347, having made its way across from Asia. It raged for 5 years and millions died, some estimate 20 million.

The Hundred Year’s War which was between England and France, was going on from the years 1337 to 1453.

A peasant revolt occurred in England in 1369 due to the taxes demanded to finance this war, and one of the leaders of that rebellion was executed quite close to the area where Julian lived.

The church also was going through difficult times with schisms and the Inquisition in parts of Europe.  Retribution was carried out on Jews and others perceived as non believers.

With all these bad things going on, do you still want to time travel?

So what did Julian do? She spent her time in contemplation of God, out of society’s view and she became known for her visions.

Her longing for God was a deep one and when she suffered an illness when she was around 30 years old in 1373, she thought she was going to die. The last rites of the church were given to her, but she survived.  She had 16 visions, or “showings” as she calls them, which gave her such comfort during this time. Then she went into seclusion and spent time on reflecting on her visions to discern their meaning.

Julian would have lived in a small room attached to a church in Norwich, with maybe 3 windows and one door – one tiny window where she could view Mass and receive the bread and wine, one where she could receive her meals and one which gave her access to people people passing by.  She was able to give spiritual advice through the window to those who visited, though she may have done this from behind a curtain. We know she was visited by another mystic Marjery Kempe, who recorded the visit in a book she wrote. It is thought Julian had a cat as a companion and that is why you often see icons of her depicted with a cat.

We do not know much about her. Had she been married, did she have family and what was her real name? We know she had benefactors – were they her family? We do not know.

She did describe herself as unlettered which may have meant she could not write Latin. So her book she wrote about her visions was in English, and as far as we know the first book written by a woman to survive the centuries.  This happened some 20 years after her visions when she discerned more of what her visions meant.

First of all there was a short book on her showings then a larger volume was written. Called  “ Revelations of Divine Love” the manuscript has survived wars and revolution. It was ready for publishing around the time of Henry the 8th  and Elizabeth 1st but it was considered too dangerous to do it then. Over the centuries the manuscript was hidden in monasteries in Europe for safe keeping

It was first published by a Benedictine monk in the 17th Century.  A modern version was published in 1901 and it was still being published  today with modern translations of the old English.  The fact that this book is still published today is a miracle but the fact it was written by a woman makes it even more special.

What do her visions say?  As part of her 1st vision, she describes God as follows

I saw that for us he is everything that we find good and comforting. He is our clothing, wrapping and enveloping us for love, embracing us and guiding us in all things… Being wrapped in God’s love is wonderful thought and maybe we can think of that as we get dressed each day.  What a way to start the day in this contemplative way!

In another part of her first vision, Julian describes a picture of something very small in these words…..

God showed her something in the palm of her hand, no bigger than a hazelnut and round as any ball. She wondered what it could be and then came the answer: “It is everything which is made.” She was amazed, because she thought that it was so small it could easily fall into nothing. Then came another word: “It lasts because God loves it; and thus everything has being through the love of God.” She remarks that she noticed that it had three properties:  “The first is that God made it, the second is that he loves it, the third is that God preserves it.

Julian realises that our seemingly small world can feel fragile, causing anxiety and lack of hope but she concludes the world will last, as God always seeks an everlasting communion with us.

There is a modern day image that reminds me of the hazelnut story.   Have you seen the picture of Earth in space – it is a small blue ball in the middle of space

This picture was taken in 2015, 340,000 kilometres from Earth. Ice-covered Antarctica is at the center of the image, and Australia is near the top.

We know how small the earth looks from space, fragile but filled with life. But it is a view Julian only saw in her vision.

God made it, Gods loves it and God preserves it

How do we set aside time for contemplation or times of silence in our busy lives?  It can be difficult.

Reading meditative poetry can be a way of achieving this.  Reflections by Richard Rohr is one source of material I get every day in my inbox. Though I do not get around the reading all I receive!

Already some of us do meditation.  Meditation is also part of our mission to Karralika led by Dorothea.

One of our aims is to build a labyrinth here at Tuggeranong, where we can set aside some time for contemplation.

You may ask how do we link the contemplative life with our Uniting Church values of justice?

Sister Joan Chittister, a nun in the Benedictine order is a  modern theologian, author, and speaker  and she tells this story  about the Sufis which are a contemplative branch of Islam………

The Sufis tell a story of the Holy One who said to his disciples, “What’s better, do you think? Is it contemplation, or is it action?” . . . They said, “Why, Holy One, it’s action, of course. What good is contemplation in a suffering world?” And the Sufi said, “Ah, yes, but what good is action that proceeds from an unenlightened heart?”

Contemplation is immersion in the God who created this world for all of us. And the mystics of every major religion . . . remind us of that. Hinduism tells us that within the cave of the heart, God dwells, not just in the forest.

And the Buddhists say, “Buddha is present in all places, in all beings, in all things, in all lands, not just in the monastery.”

“Where can I go to flee from your presence?” the Jewish Psalmist says [Psalm 139:7].

“Whithersoever you turn, there is the face of God,” Islam teaches.

And Christianity reminds us always: “Ever since the creation of the world, God’s invisible nature has been clearly perceived in the things that have been made” [Romans 1:20]. . . .

By the way, Sister Joan has recently been banned from attending a conference by the Roman Catholic archbishop of Melbourne.

Back to our time travel…….

In a time when the Plague was seen as divine punishment, Julian talked of love, hope and forgiveness rather than duty, sin and punishment.  This counteracted the great emphasis on sin in medieval times.

As Julian explains her fourteenth revelation she begins by speaking about prayer. She explains that God is the source of our prayer and that our prayer is his willing within our lives. She speaks also of God being glad and delighted with our prayer.

She also talked of God as both Father and Mother and I quote  “as truly as God is our Father, so truly is God our Mother.” (Long Text 59)  Perhaps this was another reason why her book was hidden away in the monasteries over the centuries.  Maybe these thoughts were too uncomfortable for the bishops  and monarchs of that time.

These are Words of hope which resonated with me during some uncertain times in my life They have become a mantra for me during my times of depression. We can feel safe in God, despite our shortcomings and all that we go through in life. 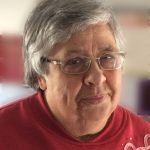 Bronwyn loves exploring ancient thoughts from Biblical scholars including the Celtic tradition, but also believes it is important to get to know the progressive thinking in the church in the 21st Century, as we prepare the Church for the future.

Bronwyn learnt about the mystic tradition during a year long course on Christian meditation in 2007, and has also done a short course on the New Testament at Pilgrim Theological College in Melbourne. She has been a Lay Presider of the Sacraments since 2019.

As an Elder, Bronwyn hopes to work for all people at Tuggeranong UC who are on their faith journey with her.