For folk who like to catch the odd fish, that is a great sentence – I am going fishing!

This text resonates with me for a few reasons. When my parents were living at Lake Macquarie, we loved it when the Old Man (my father) would say: Let’s go fishing. He had an old Sydney Maritime Services Board launch. It had a single pot petrol motor that moved us along the beautiful shores of the lake, trailing some lines behind and catching some lovely tailer for a meal later in the day. The kids would sit on a stool at the wheel and we all loved those times.

And then it is only a month ago Jenny and I were sitting on the shores of the Sea of Galilee, our imaginations alive to the possibilities of our environment – fishermen fixing their nets, Jesus teaching a crowd by the lake, and then the sight and smells as Jesus stirred a fire as he cooked a breakfast for Peter and his friends.
Let’s pick up the story again, as the disciples decide to do what people have loved to do from time immemorial.

They decided to take a break and go fishing. It’s a wonderful way to become very aware of the Presence of God through the beauty of His created world, watching the birds, watching the sky, watching distant purple mountains. It’s a great way to absorb the beauty of our natural world.

I suspect it wasn’t quite like that for the disciples that night as they set out to go fishing on the Sea of Galilee.

They were now back home in Galilee; but Jesus, their Leader and friend, the source of all their hopes, was gone and though they knew He had risen, there seems to be little understanding of the implications.

Perhaps they believed they’d left Him behind in Jerusalem. Perhaps their minds were still bound by time and space. It sounds as though they don’t know quite what to do with themselves, so they fall back on a diversion.

“I’m going fishing,” says Peter. And you can almost hear the relief in the voices of the others as they very quickly agree: “We’ll come with you.” It was something to do. Anything to take their minds off their loss. Anything to fill the void.

Somehow, it doesn’t really work. They don’t catch anything. Perhaps their hearts weren’t in it; and what can be more frustrating and depressing for professional fishermen than to go home with empty nets, after working all night? Nothing, it seems, was going right for them – not even their very familiar work.

After working all night, and as the light brightened, they were able to discern a figure, standing on the shore. Perhaps He’d been there all the time, throughout the entire period of darkness, but they hadn’t been able to see Him until the darkness began to lift.

At any event, by the time they spotted Him, He had a fire going and fish cooking, so He must have been there for quite a while. As usual, they fail to recognise Jesus. Yet they follow the instructions of this stranger.

Perhaps they realise His vantage point, on the shore, will give him a better overview of the situation. Often we find a more fruitful way to do things better in the most unexpected places, or from an unexpected source, or even a dimly seen stranger on the shore. And sometimes we are so deep in the situation or activity, we are blind to alternative courses of action.

Fortunately, the disciples aren’t too proud to follow the stranger’s instructions. They cast the net just a little differently. They shift position, as it were, and that small shift makes all the difference. The nets are filled to overflowing.

It’s at that moment one of them makes the connection, which seems so obvious to us, with the benefit of hindsight. “It’s the Lord! He’s here!”

Of course, when we’re living through darkness, unable to see who’s standing there, and some person or some intuition or something, suggests we might shift our position just a little, it isn’t nearly so obvious to us that it might be the Lord. In fact, I venture we are likely to resist strongly. First, we have to find the humility to follow what might seem like a useless suggestion. It’s only later, when we see the results, that we begin to recognise God’s hand, and to realise he was there all along.

Once the suggestion is made, once Jesus is named, all the disciples instantly recognise the truth; and they all react differently, as people do. Peter, impulsive Peter, immediately jumps overboard. There’s something we can’t help admiring about that instant, headlong rush towards Jesus. On the other hand, people who go overboard about something can be quite irritating. Sometimes they find themselves in deep water, and have to be rescued. Often they seem to leave others to do the hard work, the drudgery, as they’re off, following their heart’s desire.

Peter was off in an instant, but the others had to pull the boat in, dragging the net full of fish.

Are we surprised that Jesus is concerned with their physical comforts; with warmth and food and fellowship. What more welcoming sight can there be when we come in from a long, cheerless, cold and wet night, to find a fire blazing, and breakfast cooking? If people are having a bad time, it’s often physical comfort that they need.

It is wonderful that this is a characteristic of our community here, whether through formal ways or in small and private ways. It may be just the presence and touch of another human being, or a thoughtful gift, a visit, a flower or an email or note.

It is interesting to note the familiar language of Jesus with this meal. Jesus isn’t particularly concerned with the huge catch of fish. He doesn’t say:
“Make sure you give 10% to the poor.” Or, “That’s enough to set you up in a nice little business. Invest it wisely. Don’t waste what I’ve done for you.” He doesn’t even mention the catch. It’s a gift, with no strings attached. Jesus has given them the means to realise this huge catch of fish.

It’s completely up to the disciples how they use that gift. Jesus takes just a small part of the catch, in order to feed His friends. The dawn breakfast enjoyed by His disciples is a significant meal; almost a sort of Communion meal.

In verse 13 we read that “Jesus came and took the bread and gave it to them, and so with the fish” It’s Eucharistic language, the sort of language used by Jesus at the Last Supper. But at this meal, there is no wine. It is not like the Passover meal He had with them before the crucifixion. This is different. At this meal He attends to their physical hunger.
Why fish, instead of wine which might have made the point a bit clearer?

The primary use of fish was for food, so Jesus is nourishing the disciples at this meal.

If we look a bit further into the ancient symbolism of fish, it is possible to make a connection with Jesus’ actions here at the lake. Fish, as a food, and as a symbol, were important to the people of the ancient Middle East.

In the plagues of Egypt, back in the time of the Exodus, all the fish in the Nile died, so the fish became symbols of death (Ex. 7:21). Later, in the time of Isaiah, the fish symbolised death from drought (Isaiah 50:2). The writer of Ecclesiastes uses the fish to symbolise premature or untimely death (Ecc. 9:12). Perhaps with the symbolic great catch and by using the fish at this meal, Jesus is alluding to His resurrection, His victory over death.

Jesus has a habit of turning things upside down, and here in this story we see a classic example. The fish, once a symbol of death, become, for Christians, a symbol of life.

From the time of the early Church, the sign of the fish became a symbol of the risen Lord. ICTHUS is the Greek word for fish. It is also an acrostic, because the Greek letters that make up the word, are the first letters in the words: “Jesus Christ, Son of God, Saviour.” The fish symbol was used as a secret sign during the persecutions to identify Christians. The use of the symbol of the fish persists to this day as a kind of badge for Christians – a symbol to recognise a follower of Jesus.
So, where are we in this story?

I venture that we are in the boat, doing the familiar work of fishing, or the work of mission as we carry it out in this faith community. Maybe we are quite comfortable with how things are going.

Do you think we are alert to the figure on the shore, calling us to do something different, are we alert that we might discover Jesus in new and unexpected places?
Are we alert to discovering Jesus in unexpected people challenging us to change our ways?

Remember that the promise is an astonishing and abundant catch. What do you think this might look like in our community?

I hope you manage to read Elizabeth’s notes on the readings, usually found on our website each week, or on our Facebook page.

She reminds us that God’s love, set loose in the world through the resurrection, needs our hands, our feet, our voices and our hearts to make it known and understood and to be transformative in our neighbourhoods and community.

God invites us to change our perspective and cast our nets in different and unexpected places in order to feed the flock.

So, the message for us and our church is: are we willing to have our lives changed, to be transformed, especially if it means disrupting familiar and comfortable patterns? Are we able to continue to encounter the risen Jesus in the every day?

O God, sometimes our darkness is very black we fail to notice You, even when light begins to dawn. Our own problems can be so all-engulfing that nothing seems to go right.

O God, help us to shift our position sufficiently to enable us to see You standing nearby, waiting to meet us in our need. Help us to recognise You, however unexpected Your appearance might be. May we respond to with heart and mind and soul and spirit and cast our nets in new and challenging places. We ask this, eager to join You in your work.
Amen. 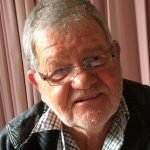 Bill Lang is secretary of the church council and convenor of the communications group. He has been a regular preacher at TUC since he and Jenny joined the congregation in 1975. He is a presbytery representative, and a member of the Karralika outreach team and the Child Care Advisory Group.