Who do you think you are?

‘Who do you think you are?’ is a popular TV ‘reality show’ in both Australia and the UK. If you’ve ever seen it, you’ll know the format. Some celebrity is chosen for genealogical investigation. A team of historical researchers gets to work on the celebrity’s forebears to see what unusual snippets of information can be dredged up from the ancestral records. For example, there could be an unknown convict ancestor; or some forebear might turn out to be an Afro-American who arrived here during the gold-rushes; or the great-grandparents might have eloped, fleeing the homeland for Australia because their families disapproved of their marriage.

‘Who do you think you are?’ is essentially a show about personal identity and self-perceptions. For example, who do I think I am? Easy! “I’m an elderly, middle-class Anglo-Celtic male; I’m a husband, father and grandfather; and I’m a one-time journalist, teacher & public servant who in retirement works full-time as an historian; AND I’m a Christian, a Protestant in the reformed church tradition, plus I’m a sometime lay-preacher in the Uniting Church.”

But which of the descriptors just enumerated is the one conveying the most important information about me? Easy — again! It’s “Christian”. Why that one? Well, that’s the most important because it best describes the kind of person I try to be.

But what is a Christian? What are the defining characteristics?

Each of the four Gospels has a go at answering that question, We heard some of the Christian qualities set out in Matthew in the first of our Bible readings this morning. Christians shouldn’t be ostentatious in their charitable acts; nor should they make a great display of their piety. They do their good deeds and carry out their acts of worship unobtrusively. Nor should they be judgemental; and they certainly shouldn’t be hypocritical by finding fault with others when their own faults are glaringly obvious.

The Epistles of Paul say much about leading the Christian life. Romans, Corinthians, Ephesians, Galatians, Colossians and Hebrews all dwell at length on the Christian attributes.

Paul often discusses these negatively, as a list of “don’ts” rather than positive “do’s” For example in Galatians 5, he warns the Christians of Galatia to be on their guard against

Unfortunately, nowhere in the Bible will you find a comprehensive category of things Christians must and must not do. Nor will you find in Scripture a detailed check-list of attitudes, behaviours and habits that characterise the good Christian. What has happened instead is that a whole branch of theology has developed to deal with these matters. It’s called ‘Moral Theology’. Not all of us, however, have either the time or inclination to read up on moral theology; but don’t despair because various theologians and evangelists tell us that all we need do is try to imitate Jesus. For example, John Wesley, the founder of Methodism, taught his followers that sincerely endeavouring to imitate Jesus was the key to salvation. This idea resurfaced during the 1990s in the “What Would Jesus Do?” movement. The idea was that if you continually asked yourself and then acted on the “WWJD” question, you’d be living how God wants you to. The reverse of the question of course is “WWJND” — “What Would Jesus NOT Do?”

Meanwhile, since the development of the Internet over the past 30 years, websites telling you how to be a “legitimate” Christian have proliferated. In preparing this sermon I found one of a chap called Jarrid Wilson, who argues that there are 13 qualities found in true Christians, all of which are also found in Jesus himself.  According to Jarrid Wilson, if you’re a Christian you’ll have these attributes:

1. Loving: You love your enemies, your neighbours, your family, and your friends. You aren’t afraid to love when others are withholding it.

2. Forgiving: The rest of the world may hold grudges, but a Christian will always show grace and forgiveness.

3. Selfless: You don’t think of yourself before others. Your spirit is hard-wired to put others before your own needs, wants and desires.

4. Servanthood: You give and serve out of the abundance of your heart. You are passionate about serving others, just as Christ came to serve us.

5. Humility: Humility is a posture in which the Christian is open to being moulded, directed, and empowered by the Spirit of God.

6. Driven: You are a goal-minded individual who seeks after the will of God. Your driven heart keeps you focused on God’s promises, his will, and his grace.

7. Passionionate: You are passionate about Jesus, sharing the promises of God, and showcasing the living and breathing image of love. Your enthusiasm for Christ takes you deeper into the character of God himself.

8. Compassion: Compassion is your middle name if you’re a Christian. You bear the burdens of others, feel their pain, and do whatever you can to comfort those going through a tough time.

9. Patience: Those who follow Jesus will slow down, patiently seeking Godly wisdom, and pursuing the guidance of Christ.

10. Self-control: The mature Christian is someone exercising self-control. You don’t succumb to fits of intemperate self-indulgence because Jesus didn’t either.

11. Kindliness: A Christian is a kindly person because that reflects the essentials of an active relationship with Jesus, who was always kind to those who needed kindness.

12. Joy: As Christians, we are called to rejoice in all things good and especially in our relationship with Jesus, being in which is a great privilege.

13. Peace: Christians don’t seek to sow strife. They try to be peacemakers, bringing peace to conflict-ridden situations through the love and grace of Christ.

There are many lists of that kind. Google a phrase like “Qualities of a Christian” and you’ll find dozens. Some will list qualities different from those just enumerated.

For instance, depending on which list you consult, you’ll be told that Christians:

There’s another quality that few of the lists I seen seem to emphasise. This is that the true Christian believes that Jesus was who he said he was — and died to prove it. That is, he was and is the Son of God. As he said in John 11:25, “I am the resurrection and the life. Those who believe in me will never die.”  That, to me, is the sine qua non, the indispensable factor. If you don’t believe that Jesus was God incarnate, God in human form, you can’t really call yourself a Christian. Along with the reality of “Christ crucified and risen”, that’s the core belief to which all Christians subscribe.

As well as possessing qualities like those just itemized, a Christian is also someone on a journey. It’s a journey through life. That’s not unusual. Everyone does it, though many might not recognise it. For a Christian it’s a journey of a particular kind — a pilgrimage. That is, it’s a journey with deep religious significance — travel to a sacred destination, attaining which will enhance the pilgrim’s sense of having achieved a state of holiness and righteousness. For the Christian, the whole purpose of journeying through life is to reach the goal of blessed sanctity which will occur when the pilgrim comes face to face with Jesus at the end of the road. By then the pilgrim will have entered the Kingdom of Heaven and will have joined the heavenly company of the righteous.

The chief character, a chap called Christian, leaves his wife and children at home in a place called the City of Destruction, because he wishes to go to go on pilgrimage to somewhere called the Celestial City. At first the going is very difficult because he’s carrying an enormous pack on his back. It’s his burden of guilt for all the evil he has done. After travelling a long distance he reaches the ‘Place of Deliverance’, which is where the cross of Jesus stands. At that point the straps on his huge back-pack break, and he is freed from his burden as it rolls away from him. Along the way he meets many characters. Some of them seek to hinder his journey. Their number include Obstinate, Worldly Wiseman, Flatterer, Atheist and Ignorance. Others seek to help or accompany him; and they include Goodwill, Faithful and Hopeful. His adventures include getting bogged in the Slough of Despond, running the gauntlet of demons and ogres in the Valley of the Shadow of Death and being imprisoned in Doubting Castle. He must also fight dreadful adversaries, including Giant Despair and the Biblical monster, Apollyon. Eventually he reaches the River of Death, in crossing which he nearly drowns; but in the end he struggles across and climbs Mount Zion to enter the Celestial City.

Any Christian seeking the Kingdom of God will easily recognise the symbolism of Pilgrim’s Progress; and it doesn’t take much imagination to identify with the hero, Christian, who really represents all Christians, as he struggles towards his goal.

Interestingly, our Uniting Church also uses the image of the pilgrimage in its foundation statement, The Basis for Union. Clause 3 tells us that the Uniting Church “is a pilgrim people, always on the way towards a promised goal”. It then points out that, first, “here [the church] does not have a continuing city but seeks one to come”; further, “on the way Christ feeds [the church] with Word and Sacraments, and she has the gift of the Spirit in order that she may not lose the way”.

St Paul’s letter to the Hebrew’s also uses the image of the pilgrimage, as we heard in the second of our scriptural readings this morning. Paul likens the Christian journey to a race we all must run. The race ends where Pilgrim’s Progress does, in the ‘Celestial City’, which Paul calls ‘Mount Zion, the city of God, the heavenly Jerusalem’, code for the Kingdom of God,

Well, who do you think you are? Do you identify as a Christian? If so, what does that mean for you? If I asked you to write down ten personal qualities which demonstrate that you’re a Christian journeying towards the Kingdom of God, what would those ten attributes be? I won’t embarrass you by asking you to write them down now and then read them out or pin them on the noticeboard. As a spiritual exercise, perhaps you’d like to draw up your own list when you go home from here. (To help you, I’ve printed off some blank numbered lists.)

Meanwhile, as we reflect on the essential qualities of a good Christian, and of the journey towards righteousness and salvation which we must all undertake, perhaps we can recognise that our religious faith should be the attribute that describes us best. Hopefully, that will be the quality for which the people you encounter will remember you.

Whatever else we might be — parents, offspring, kinfolk, neighbours, workmates, members of a trade or profession, practitioners of particular arts & crafts — I trust that “committed practising Christian” is high among the descriptors for self-identification of each one of us.

In that hope, we now pray this prayer:

Dear Lord, as we rise to meet each new day, please let us be filled with your spirit. Wherever we go, let us spread love, joy, peace, goodness, and faithfulness. Let our active faith radiate from us. Help us consciously strive to acquire all the characteristics of the good Christian. Let us desire to become more like you and to worship you in all we do. Help us desire these things so much more than the ensnarements of the worldly life. Thank you for always going before us that we may follow in your footsteps; and aided by your grace may we never depart from that. In Jesus’ Name, Amen. 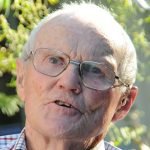 Dr Ian Willis is a long-term lay preacher at TUC. He has a deep commitment to prayer and regularly gives his time to pray with preachers and worship leaders before worship services each Sunday. Ian is also a writer and historian.