Struggling to connect to God

The book of Exodus follows the journey of the Israelites from slavery in Egypt to becoming a new nation as the people of God. The story of the people of Israel worshipping the golden calf is a well-known story within that narrative.

The people of Israel had been slaves in Egypt where they were treated harshly. They probably had difficulty believing that God had not abandoned them. Then God sent Moses to tell Pharaoh to set his people free. This was a huge struggle because Pharaoh did not want to let his slaves go. God saved his people once again by parting the Red Sea, when Pharaoh and his armies pursued them.

God (Yahweh) then led them in the wilderness, made visible as a pillar of cloud by day and a pillar of fire by night (13:17-22). Yahweh provisioned them with water (15:22-27; 17:1-7) and food (chapter 16). The people have had a great deal of exposure to Yahweh’s presence and providence. They have ample reason to believe that the God who has helped them in recent days will provide for them in days to come.

In chapter 19 the Israelites reached Sinai, where thunder, lightning, a thick cloud on the mountain, a trumpet blast, fire, and smoke signalled the presence of God. God made a covenant with his people and they agreed to keep his commandments. Moses went back up the mountain to receive the detailed teachings of how this covenant relationship will function.

Moses was with God for 40 nights and 40 days and during this time the Israelites lost hope that he would ever come back. Moses has always been the go-between the people and God. Moses was up Mount Sinai in what looked like a raging bushfire or volcanic eruption, an unlikely environment for a human being to survive for 40 days. The people felt lost and became anxious. They did not have a direct connection with God. God appeared to them as pillar of cloud by day or pillar of fire by night during their journey and now all they could hear was thunder when God spoke. They wanted the reassurance of something tangible they could relate to.

“32 When the people saw that Moses delayed to come down from the mountain, the people gathered around Aaron, and said to him, “Come, make gods for us, who shall go before us; as for this Moses, the man who brought us up out of the land of Egypt, we do not know what has become of him.” 2 Aaron said to them, “Take off the gold rings that are on the ears of your wives, your sons, and your daughters, and bring them to me.” 3 So all the people took off the gold rings from their ears, and brought them to Aaron. 4 He took the gold from them, formed it in a mold,[a] and cast an image of a calf; and they said, “These are your gods, O Israel, who brought you up out of the land of Egypt!” 5 When Aaron saw this, he built an altar before it; and Aaron made proclamation and said, “Tomorrow shall be a festival to the Lord.” 6 They rose early the next day, and offered burnt offerings and brought sacrifices of well-being; and the people sat down to eat and drink, and rose up to revel.”

There are several ways of interpreting this part of the story. One is to sum it up as a failure of leadership by Aaron. The assumption is that Aaron is a weak leader and a people pleaser. The verb “to gather” comes from the verb in Hebrew, which means to assemble for conflict or rebellion. Aaron was under pressure by the people to come up with a solution. It offers us the choice whether Aaron was a willing participant in the rebellion against God or if he felt coerced.

Another matter is the translation of the Hebrew noun Elohim, which is both the generic plural for gods and singular for the God of Israel. One way to look at this is what the people want is a tangible image of God or gods to lead them. They had example of cultures around them who were using animal images to represent the gods. A bull calf was a symbol used by the people of Canaan. The people of Israel were a diverse group and there could have been intercultural mingling, including marriage, with the surrounding people. The intent then is to replace Yahweh with the symbols of other gods (apostasy).

Another view is represented by some commentators who argue that the calf is intended to function as a symbol of Yahweh, not other gods (and so this is not technically apostasy). And when the people say, “these are your gods” (32:4), because the Hebrew word for “gods” is the same as the word for “God” (both are ʾĕlōhîm), the people are merely identifying the calf as Yahweh.

Following this line of argument Aaron and the Israelites did not think they were abandoning Yahweh and turning instead to the idols of the nations around them. They thought that they were using this beautiful golden statue as a way of connecting with Yahweh in much the same way that they later used the Ark of the Covenant and the Temple.

A struggle to connect with God and to feel hope is a familiar theme in our times as well. Our lives are changed completely, because of the corona virus. And we also want tangible signs of hope and find it hard to remain sensible under prolonged restrictions. Lots of people flocked to beaches during the long weekend even so they might have put themselves and others at risks if they did not follow social distancing guidelines.

We can probably identify with the people who might have felt decades of being abandoned by God in Egypt and then they had just a few months of being connected to God through Moses and now they the lost him. They are back to feeling disconnected.

We probably experience similar emotions when we deal with the bigger struggles in life. I, for example, find it hard to keep hold of hope, when I think about all the issues of tackling climate change. I know we have about 10 years left to make substantive changes before we reach a tipping point that would change the earth climate forever. Still, I see the politicians, not realising that we are facing a climate emergency. They say we must balance economics with the well-being of the planet, because they do not realise there will be no economic well-being if our earth reaches this tipping point.

Now I would like to go on with the story. God becomes very angry in response to the action of the people. He wants to destroy them and start again with Moses. This could be attractive for Moses. He could give up the burden of leadership. He would have an assured place in history.

Moses takes a courageous stand. Moses’ response is to intercede on the people’s behalf. Moses does not appeal to God’s compassion but rather God’s reputation. First, Moses turns the responsibility for the people back onto God: “O Lord, why does your wrath burn hot against your people, whom you brought out of the land of Egypt?” (Exodus 32:11). Next, he advises God that the Egyptians will question God’s motive for bringing the Israelites into the wilderness (Exodus 32:12). Finally, Moses appeals to God’s pledge to Abraham, Isaac, and Israel (Jacob) to make a great nation of their descendants to dwell forever in the land God promised them (Exodus 32:13). Thus, Moses is able to persuade God to set aside God’s anger and let the people live (Exodus 32:14).

Moses is very clever in his argument. Moses shows a lot of insight into God’s character. He speaks to God of the divine promises to the ancestors of the people, thus implicitly urging God to be faithful to those promises. Moses speaks of the terrible waste represented in bringing the people out of Egypt just to destroy them. Moses is reminding God of the tremendous investment God has made in saving the people. He reminds God of his own character which is “slow to anger and abounding in steadfast love and faithfulness …” (Exodus 34:6-7). Moses serves as a model for the Church: to bear witness to God’s faithful compassion and to urge others to seek reconciliation with God and each other.

The story also shows that God is in a relationship with Moses and invites input from him. This is hope for us because we are also offered the same relationship based on love and dialogue. The story does not end with the people’s rejection of Yahweh. The covenant is ongoing, and the ancient Israelites and we also continue experience the grace of God.

We are reassured that God is not distant and that he wants a relationship with us. Despite this, we continue to struggle at times when we feel the absence of God and the pain of doubt.

We are also left with the question what does the golden calf means in our lives. What do we worship? This story speaks to the need of keeping to our faith when life is tough. And there is a temptation to go for the easy solution. We, fortunately, have a new Moses. Jesus is there to lead us, and he is giving us the Holy Spirit as a companion and guide.

Maybe you could picture in your mind the particular contemporary idol that most temps you. Picture yourself placing it between two large millstones and grinding this idol into powder. Then you might decide what to do with your idol – handed over to Jesus or maybe even swallow it?

I invite to take a short time to contemplate who you identify with – Aaron the people-pleasing leader, Moses who advocates for his people or the people of Israel who struggle with feelings of abandonment and disconnection from God. 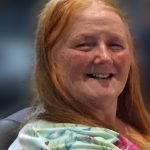 Dorothea Wojnar is an elder, worship leader and preacher at TUC. She has a deep interest in meditative and contemplative worship. In addition to her roles at TUC, Dorothea is a member of presbytery and a member of its Pastoral Relations Committee.